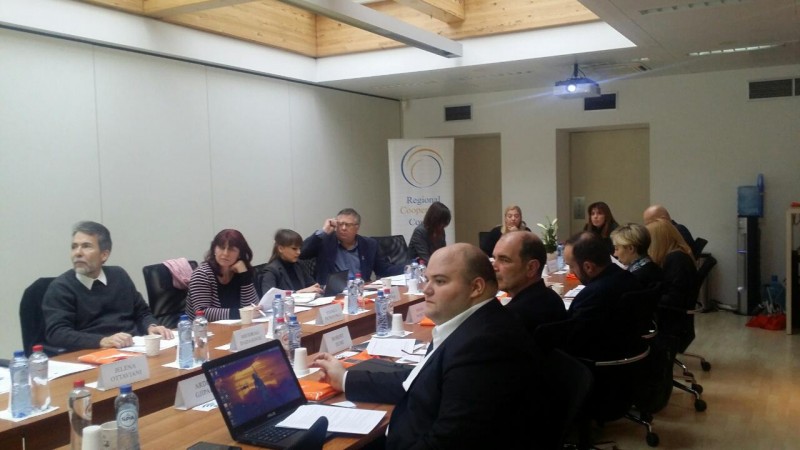 RCC and representatives of participating economies from the Western Balkans at the meeting of the Working Group on Open Science (WGOS) in Brussels, 9 November 2016 (Photo: RCC)

Sarajevo/Brussels – Regional Cooperation Council (RCC) and representatives of seven Western Balkan economies presented their draft plan of activities for the next period and the latest developments in the field of Open Science at the 4th meeting of the network of National Points of Reference on Scientific Information (NPR) of EU member states and the European Commission in Brussels, on 10 November 2016.

RCC-led regional Working Group on Open Science comprised of officials from Ministries in charge of science from Albania, Bosnia and Herzegovina, Croatia, Kosovo*, Montenegro, Serbia and The Former Yugoslav Republic of Macedonia got invited to attend regular meetings of the National Points of Reference of the EU member states in early October this year and this meeting was the first time ever that the RCC and representatives from the region could actively take part in the work of this forum.

RCC and representatives of participating economies from the Western Balkans had met a day earlier to work on the terms of references of the Working Group and the draft Work Plan, which was presented at the EU meeting on scientific information.

“Members of the  Working Group met  under the RCC auspices yesterday to finalise working documents including the terms under which the group will work and its plan of activities for the upcoming three-year period. All these will be shared with the participating governments for comments and approval, after which the Working Group will embark on the implementation”, explained Mimika Dobroshi, RCC’s Expert on Smart Growth adding that the agreed draft plan, although not final yet, was presented to the EU member states’ representatives working in the open science area to illustrate direction and activities the region is ready to undertake.

RCC and representatives of Ministries in charge of science from the region established the Working Group on Open Science at the meeting organised by the RCC on the margins of the International Open Data Conference (IODC) in October 2016. Also the participants agreed to by the end of the year appoint national points of reference (NPRs) for the Open Science to represent the region in the EU Open Science meetings.