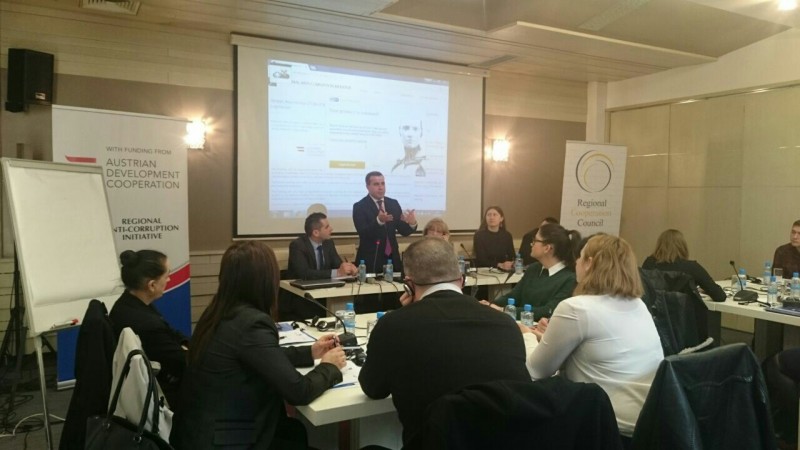 RCC, RAI and State Commission for Prevention of Corruption, co-organized the training on corruption proofing of legislation on 27-28 of March 2017 in Skopje.. (Photo: RAI Secretariat)

Skopje/Sarajevo – A second round of the training on corruption proofing of legislation, organized by the Regional Anti-corruption Initiative (RAI) Secretariat with support of the Regional Cooperation Council (RCC) and State Commission for Prevention of Corruption, took place on 27-28 of March 2017 in Skopje.

The training topics included process, impact and role of ICT in corruption proofing, risk allocation, and preparation of reports and recommendations needed for respective institutions.

It marks a significant milestone, as it is a first attempt to conduct a regional peer exchange whereas experts on corruption proofing are engaged in the training by sharing their practical experience and expertise from their economies.

Speaking at the workshop the RCC’s Expert on Governance for Growth - Public Administration Reform and Anticorruption, Radu Cotici, said that the main objective of RCC’s actions in this area is to support strengthening governance, prevent corruption in the region and increase transparency in the legislative process.

“According to the RCC’s public opinion Survey, Balkan Barometer 2016, an overwhelming majority of the population in SEE, 79%, think that medical and health services in their economies are affected by the corruption. The RCC just recently published an open call for corruption risk assessment and anti-corruption assessment of laws in healthcare sector, which will assist anti-corruption bodies in carrying out their important tasks.“

The training gathered representatives of the relevant public authorities and civil society. More information about this event is available at http://rai-see.org/skopje-macedonia-27-28-of-march-2017-training-on-corruption-proofing-of-legislation-2/.