Regional Working Group on Investments at its regular meeting in Podgorica 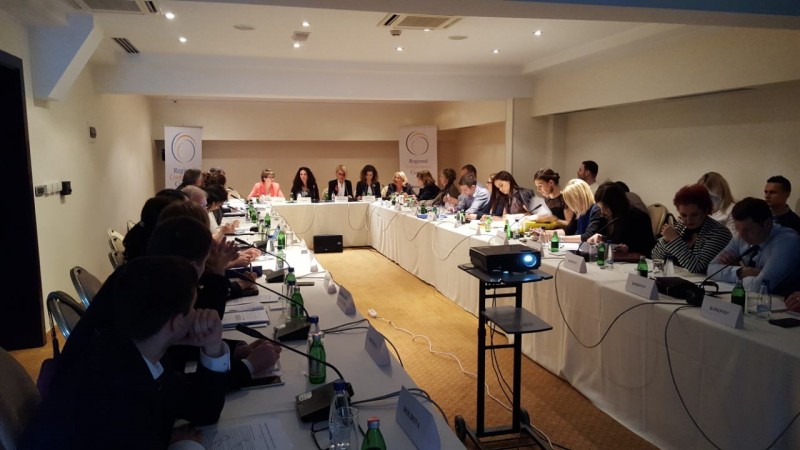 Regional Working Group on Investments met at its 7th regular meeting in Podgorica, Montenegro on 24 May 2017 (Photo: RCC/Nedima Hadziibrisevic)

Podgorica – Regular, 7th meeting of Working Group on Investments (WGI) took place in Podgorica today.
The meeting participants finalized the Investment Policy Review for South East Europe (IPR SEE) executed by the United Nation Conference on Trade and Development (UNCTAD) and announced commencement of the Regional Investment Policy and Promotion Project, to be implemented under RCC's umbrella with financial support by the European Commission and technical support by the World Bank.
Regional Cooperation Council (RCC) informed the group on other ongoing activities within the investment agenda and economic integration of the Western Balkans, which will represent an important component of the Western Balkans Summit in Trieste in July under the ongoing "Berlin Process". The draft Regional Investment Policy and Promotion Project Roadmap/Multi Action Plan was also presented at the meeting as well as UNCTAD’s  overview of key issues regarding Investor-State dispute settlement and work done under the RCC’s Working  Group on Justice, aimed at finding a possible synergy. CEFTA representative provided and update on the progress of CEFTA Investment Report.
The meeting ended with agreement on concrete tasks, deadlines and next steps to be taken towards creation of the regional investment reform agenda within the context of the upcoming WB6 Summit, finalization of the Investment Policy Review for South East Europe and Action Plan for implementation of Regional Investment Policy and Promotion project.
Working Group on Investments gathers delegates from relevant ministries coming from the South East European (SEE) Governments committed to SEE 2020 Strategy. The Group provides a valuable forum for regional dialogue for harmonisation of investment policies and for development of joint promotional efforts.