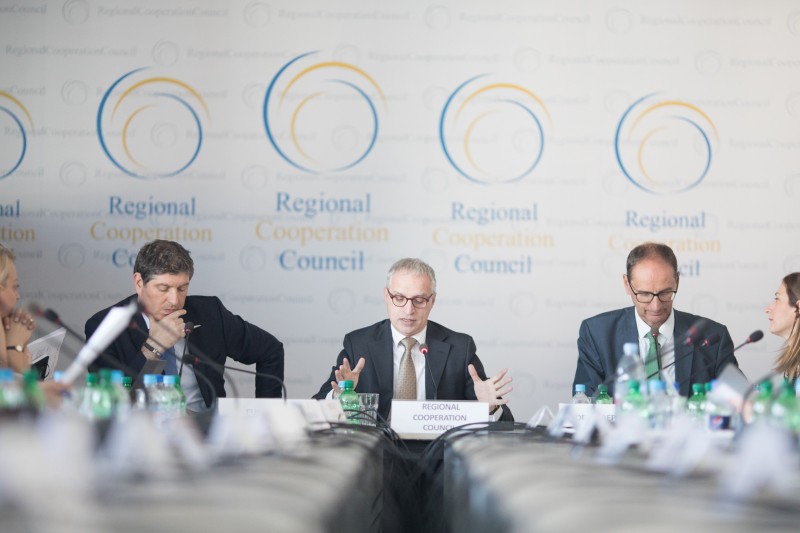 Sarajevo – Implementation of the Multi-Annual Action Plan (MAP) for the Regional Economic Area (REA), endorsed at the Western Balkans Summit in Trieste this year, commenced today in the area of digital integration.
The MAP participating parties established the Western Balkans (WB) Six Steering Committee for the preparation of the 2018 WB Digital Summit at the meeting held at the Regional Cooperation Council (RCC) Secretariat premises in Sarajevo this afternoon.
“The Trieste Summit this summer underlined how significant the Digital Agenda is for the Regional Economic Area of the Western Balkans. The RCC works with the region to consolidate its market of around 20 million people, attract investment, generate growth and jobs. To that end, with today’s meeting and starting the work on Digital Summit, we move towards one of the key MAP objectives, development of digital markets, as development of digital technology changes everything - communication, working, learning and living patterns. The region needs to utilise its potential in this area and start benefiting from it, by ensuring supply of accountable, transparent, innovative and competitive services, and knowledge sharing pools”, said RCC Secretary General, Goran Svilanovic, in his opening remarks.
Helge Tolksdorf, Head of division for EU-Enlargement, Southeast Europe, and Turkey at the German Ministry for Economic Affairs and Energy, expressed his satisfaction over that fact that establishment of the Steering Committee brings the region a step closer to the Digital Summit, as the Committee will be dealing with the Summit’s scope, goal, and organisational issues. “We are very pleased to having kick-started this important activity, as it sets the ground for the region to use its potential and place itself on the global digital map for the benefits of all involved, individual economies and its citizens, region, and the EU.”
The WB6 Digital Agenda aims to unlock access to the digital economy by integrating the region into the pan-European digital market. This requires future-proof digitisation strategies, an updated regulatory environment, improved broadband infrastructure and access and digital literacy.
“We are pleased to witness the beginning of implementation of the MAP for the Regional Economic Area. As regional digital integration represents a key segment of the Plan, timely preparations for the regional Digital Summit are most welcome. The Summit will give the region’s economies an excellent opportunity for good navigation of opportunities and risks that digital transformation brings, allowing for active shaping of the future in the digital era”, concluded Nicholas Cendrowicz, European Commission DG NEAR’s Deputy Head of Regional Co-Operation and Programmes (Western Balkans).
The meeting has been organised by the RCC, German Ministry for Economic Affairs and Energy and German Committee on Eastern European Economic Relations. It gathered representatives of the Western Balkan 6 governments, the European Commission (DG NEAR and DG CONNECT), RCC, the German Federal Government, the German Committee on Eastern European Economic Relations and industry representatives.
******
The MAP REA actions are designed to help the private sector reap the economies of scale of a 20 million market, and refocus the growth model towards more indigenous, long-term driven growth. The actions are focused on: promotion of further trade integration; introduction of a dynamic regional investment space; facilitation of regional mobility; creation of a digital integration agenda. The RCC Secretariat has been tasked, together with CEFTA for the free trade area, to inform the Berlin process Summits on regular basis on the progress achieved on the actions defined in the MAP.