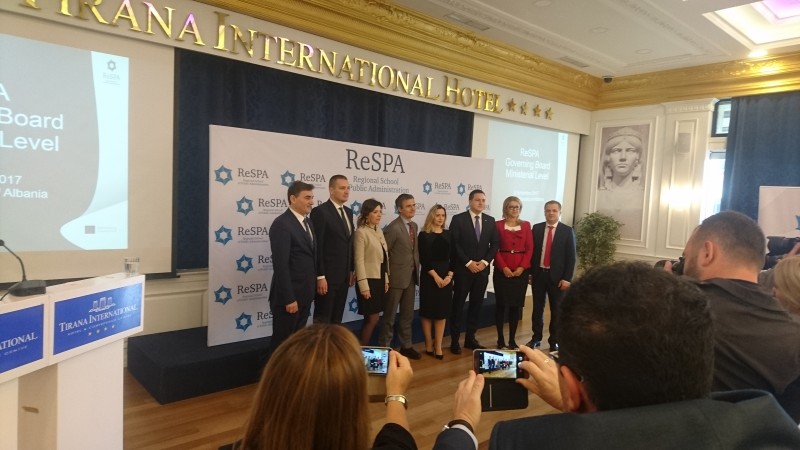 Ministers in charge of public administration reform from Western Balkan economies endorsed the 'Western Balkans Recommendations on Public Participation', at the 8th Governing Board Meeting at Ministerial level, organised by Regional School of Public Administration (ReSPA), on 6 November 2017 in Tirana. (Photo: RCC/Radu Cotici)

Bregu: The best investment in the Western Balkans is to create opportunities ...

The Recommendations, developed by the Regional Cooperation Council (RCC) in partnership with ReSPA, are the result of a joint work with the region's economies based on a need for greater involvement and stronger role of the public and civil society in legislative and decision-making processes. They represent a set of guidelines and rules made to encourage and assist governments to design policies and legislation in an inclusive manner, enabling an active participation of society, including non-governmental organisations, private sector and advisory bodies.

“The region lacks transparency in preparing and adopting decisions and policies as well as wider social participation in this process. To that end, the RCC-tailored Recommendations are meant to gear policies towards citizens first, to professionalise the civil service by institutionalising transparency and access to information, improving systems for more effective treatment of citizens’ complaints against mismanagement in public services, as we all stream towards modern economies that need smart regulations for growth, investment, innovation, market openness and to support the rule of law, aiming to promote better lives”, said Radu Cotici, RCC’s Expert on Governance for Growth.

As the public administration reform is a fundamental in the European Union integration process, while poor regulatory environment undermines business competitiveness and citizens’ trust in government, the RCC developed the Recommendations to address the identified shortcomings in the region thus streamlining the reform process in Western Balkans' economies.

Effective public participation in the policy-making process requires firm embodiment in the process itself, and should be consistently implemented in drafting of both primary and secondary legislation as well as in drafting of policies and strategic documents. The decision-making should involve public consultations before the adoption, while business and civil society organisations, and other groups, could be actively involved in the implementation phase by promoting the regulation and gathering feedback and experience with its implementation. Evaluation being the last step of the old policy and a first step of the new one is also stipulated by the recommendations, since its results should inform the new policies or their revisions.

Back in September this year Regional Working Group on Better Regulation adopted the draft Recommendations that were forwarded for finalisation to the WB Governments prior to endorsement of the final version. The Western Balkans public authorities are to use the Recommendation in their processes related to public participation. Upon the invitation of the ministers in charge of public administration launched at the Meeting, the RCC and ReSPA will follow up with the Recommendation’s implementation.