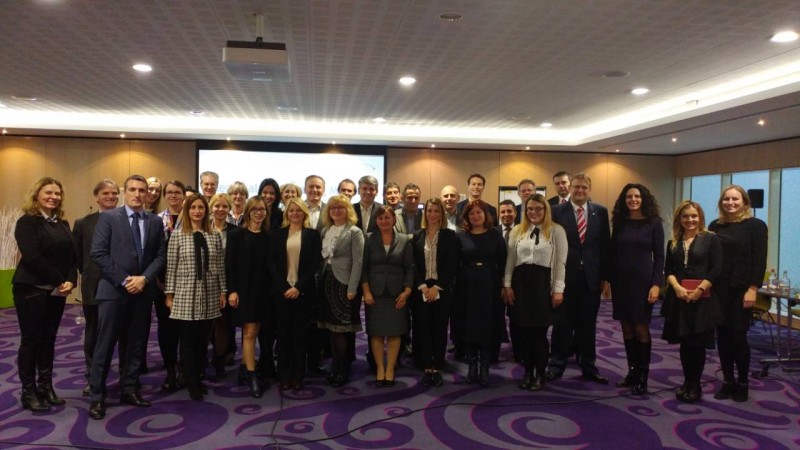 Brussels - The first regional meeting on Digital Integration, in line with the Regional Cooperation Council's (RCC) activities on the implementation of the Multi Annual Action Plan (MAP) for a Regional Economic Area (REA), was held in Brussels on 7-8 December 2017.

This stock-taking meeting aimed to support implementation of the measures under the MAP Digital Integration component. The participants from six Western Balkans (WB6) economies involved in MAP implementation had the opportunity to report on the  current state of play in this domain, existing initiatives, ongoing activities and plans for both national and regional levels, in order to analyse the status and identify needs, priorities and future milestones for digital integration in the WB along four areas of Digital Integration component of the MAP: Digital Connectivity; Trust and security; Digital skills; and Digitalisation of economy.

The meeting participants reiterated their commitment to the implementation of MAP REA digital measures, welcomed the establishment of the Broadband Competence Office as well as efforts of European Commission’s Directorate-General for Communications Networks, Content and Technology (DG CONNECT) to maximally integrate WB6 into the current EU frameworks and processes. WB6 economies were encouraged to approach European Union Agency for Network and Information Security (ENISA) confirming their ongoing Network and Information Security (NIS) alignment processes, and asked to partake in its activities as members or as observers at least.

Upon presentation on roaming prices between WB6 and selected EU member states, the  RCC expressed readiness to support further analysis on the effects of an updated regional roaming agreement for further lowering the regional roaming prices and potentially gradually introducing „Roam like at home“ (RLAH) in WB6. The participants welcomed DG CONNECT's announcement for preparation of Roadmap for lowering roaming prices between EU and WB in time for the EU-WB Summit in May 2018.

The participants also outlined the state of play and next steps in the area of broadband connectivity, highlighting the needs to share best practices in alignment and implementation of the Cost Reduction Directive, infrastructure sharing, addressing broadband deployment in underserved areas and Public-Private Partnership models for broadband development.

Initial findings of World Bank’s ‘Western Balkans digital highway study’ that examines the prospects for improving regional inter-connectivity by a better use of already deployed spare fibre networks along the energy grids, was presented at the meeting and welcomed by the participants. The Study’s findings should direct the future work to address identified bottlenecks and can be ready to be potentially presented and discussed at the 2018 Digital Ministerial meeting.

The meeting gathered representatives from WB6 economies, the European Commission’s relevant experts from Directorates-General for Communications Networks, Content and Technology  (DG CONNECT) and  Neighbourhood and Enlargement Negotiations (DG NEAR), representatives from Delegations of the European Union, the World Bank, International Telecommunication Union (ITU), The Central European Free Trade Agreement (CEFTA), as well as other regional and international partners active in the area of digital integration of Western Balkans.