Svilanovic at the meeting of WB Foreign Ministers in Sarajevo: It is “action time” for the Western Balkans 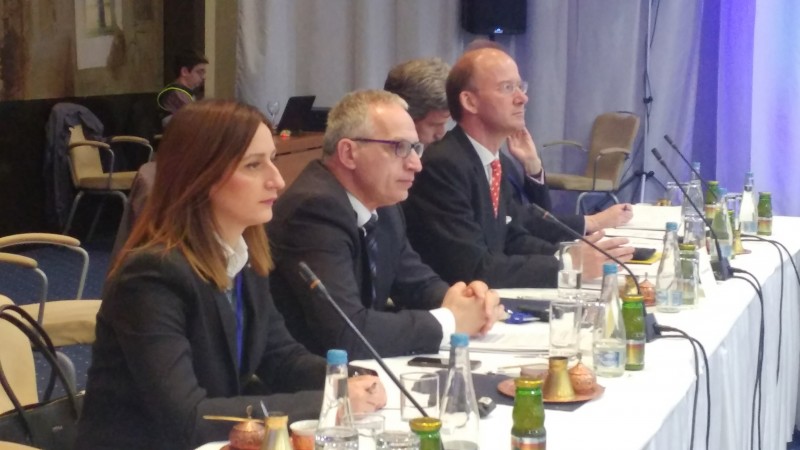 Sarajevo – The Secretary General of the Regional Cooperation Council (RCC), Goran Svilanovic, takes part in the meeting of Western Balkans (WB) Six Foreign Ministers in Sarajevo today. The meeting is dedicated to the recently published EU’s  strategy on the enlargement perspective of the region, implementation of the Berlin Process’ 2017 Trieste Summit outcomes, and preparation of deliverables for  the London Summit on Western Balkans in July 2018.

“After a rather long period of enlargement fatigue and unclear regional EU perspective, the recently published EU Strategy for the Western Balkans is a great news and brings forward a fresh opportunity. Additional impetus for the region could be suggesting the year 2025 as a potential ‘accession’ year for Serbia and Montenegro as frontrunners, but for others as well, provided they meet the criteria for membership, as recently stated by President Juncker,” said Svilanovic.

“It is now up to the Western Balkan leaders to assume full responsibility and make this historical opportunity a reality. And the European Commission should now set an example by operationalising the Action Plan in support of the transformation of the Western Balkans and its six concrete flagship initiatives.”

The Berlin process, an EU-led enlargement initiative, resulted in the current focus of RCC’s work: Multi-annual Action Plan on a Regional Economic Area (MAP REA) in the Western Balkans Six, agreed on by the WB6 Prime Ministers in Trieste 2017. This EU enlargement Strategy duly recognises central role of RCC in enhancing regional cooperation and delivering on MAP REA. The RCC, together with the region’s leaders, has already heavily embarked on this results-generating mission.

Parts of the EU Strategy’s Action Plan are exactly what the RCC has already been doing, especially in the digital integration segment. Preparations of an ambitious high-level WB6 Digital Summit, co-organised by the region’s governments, the European Commission and the German Federal Government, are well underway. This Summit, to be held in Skopje on 18-19 April, will tackle practical and strategic issues, from lowering international roaming costs and integrating the Western Balkans in a number of EU digital initiatives to public administration reform through digitalisation.

“It is hard work ahead of us: the region needs to show stamina and dedication ‒ and most importantly results ‒ in pursuing its goal. It will not be left alone on this voyage, as the EU will make its financial and technical instruments available to support the transformation. Simply put, it is “action time” for the Western Balkans,” concluded Svilanovic.