Bregu: RCC keen to embark on any challenges with full support of regional and EU partners - we don’t need to loose time in order to find it again 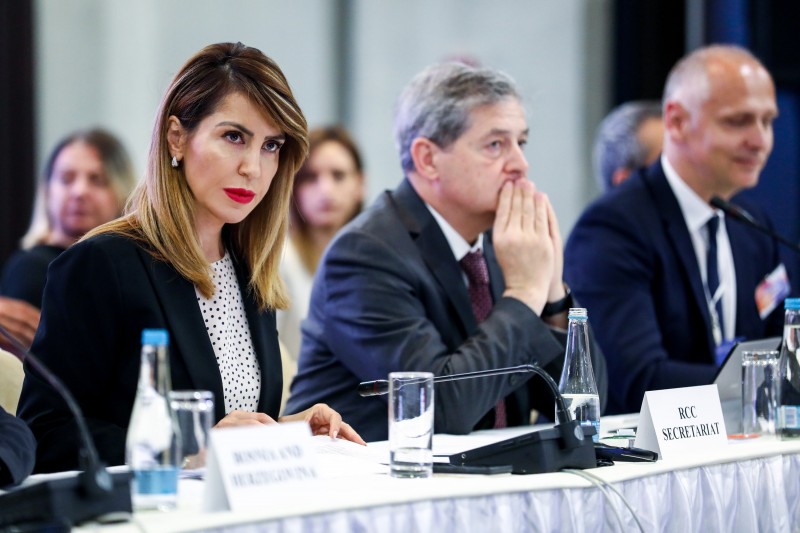 Sarajevo – „A year behind us was a dynamic one and we are prepared to continue just as dynamic in the next one. We, at the Regional Cooperation Council (RCC) are ready and keen to embark on any challenges ahead of us but we cannot do it without the full support of our regional and European partners, as we don’t need to loose time in order to find it again”, said Majlinda Bregu, Secretary General of the RCC while opening the 11th organisation's Annual Meeting taking place within the high-level meetings of the South East European Cooperation Process (SEECP) in Sarajevo today.

“If we don't work together on overcoming bilateral disputes, it will be difficult to reconcile our region both economically and socially. The price for stagnation and postponing further the decision on the opening of accession negotiations with Albania and Republic of North Macedonia is, in short, a risk. Any positive moment can precipitate easily, if the membership perspective would continue to kick the can down the road. And there’s no better time to start than now, especially as two SEECP members are taking over a joint Chairmanship of the Berlin Process, which will enhance region ownership of the process.”

Almir Sahovic, Assistant Foreign Minister of Bosnia Herzegovina addressed the meeting on behalf of the SEECP Chairmanship-in-Office (C-i-O) during the past year, reiterating full support to the RCC’s activities and thanking the organisation for great cooperation during the chairmanship as it contributed greatly to connectivity, which was focus of their C-i-O mandate.

Angelina Eichhorst, Director for Western Europe, Western Balkans and Turkey of the European External Action Service (EEAS) said that the EU will continue to provide support to the RCC and regional cooperation calling upon all partners from the region to refrain from communication through media but to try and work out the differences. She also added the EU wanted to make happen what they committed to in this region, in connectivity, economic integration and Western Balkans Strategy implementation, jointly, hand-in-hand with the RCC and all partners in the region, by working hard to make it true.

“Excellent cooperation with the SEECP C-i-O ensured smooth implementation of the regional programmes. At this point I would like to thank again the outgoing  CiO of Bosnia and Herzegovina, and reiterate our commitment and readiness to offer assistance to the incoming C-i-O of Kosovo*, as well as to wish it a successful assumption of the Chairmanship“, concluded Bregu.

The Annual Meeting participants endorsed the RCC’s Annual Report for period 2018–2019 and organisation’s Strategy and Work Programme 2020–2022, which will be forwarded to the SEECP Meeting of Ministers of Foreign Affairs for final adoption. The RCC’s Secretary General Bregu also shared the main findings of the Balkan Barometer 2019 edition with the meeting's participants, stating what citizens and businesses in the region think about current situation and circumstances in their societies.