Role of parliaments in legislative process and government oversight discussed in Sarajevo, under EP and RCC auspices 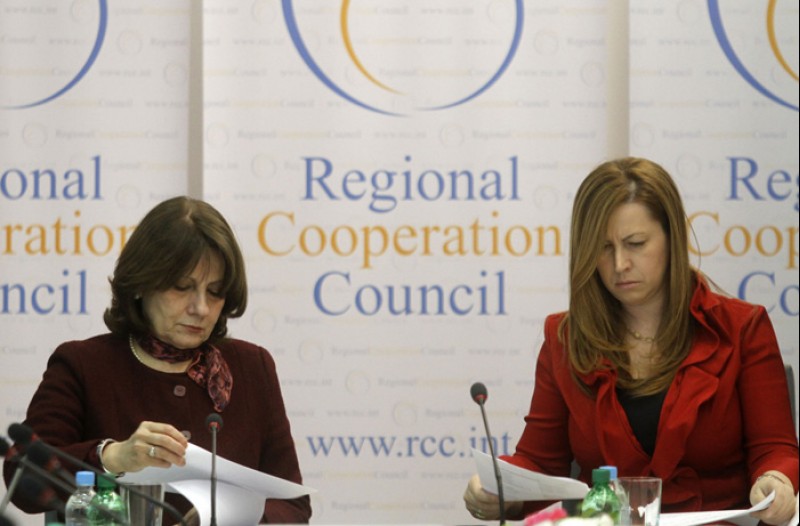 Deputy RCC Secretary General, Jelica Minic (left), and Member of the EP’s Committee on Foreign Affairs, Anna Ibrisagic, opened a two-day seminar on the role of parliaments in the legislative process and in the government oversight in Western Balkans, 23 February 2011, Sarajevo, BiH. (Photo RCC/Dado Ruvic)

Bregu: Parliamentary dialogue and cooperation remain a steady beacon in ...

Bregu: It’s the right moment for Western Balkans to show its strengths ...

SARAJEVO – A two-day seminar on the role of parliaments in the legislative process and in the government oversight in Western Balkans will wrap up in Sarajevo today at the premises of the Regional Cooperation Council (RCC) Secretariat.

Members of Western Balkans parliaments and of the European Parliament (EP) are taking part in the event co-organized by the EP and the RCC Secretariat.

The parliamentary seminar was opened by Anna Ibrisagic, Member of the EP’s Committee on Foreign Affairs, who recalled that all important legislative acts in the European Parliament are built upon broad political negotiations and arrangements between its groups.

“Consolidation, compromise-making and negotiations between political groups are much more important in the EP than in national parliaments. In national parliaments, the Government can ‘govern’ the parliament to a rather high degree, since the governing party has a majority and seldom loses any votes.”

Jelica Minic, Deputy RCC Secretary General, reminded that parliaments, as legislators, play a central role in promoting and implementing reforms, and increasing the efficiency and transparency of governing structures.

“Parliamentary cooperation gives an important impetus to harmonizing and aligning legislation with the EU acquis, launching and nourishing public debate, and strengthening wider political cooperation towards joining the EU. On this basis, and through its Strategy and Work Programme 2011- 2013, the RCC is responding to the needs of the region.”

The discussions have focused on the ways regional cooperation can help strengthen parliaments of Western Balkans, differences and similarities between legislative powers of parliaments and the legislation process in the European Parliament, new powers of national parliaments in the EU, oversight of budget implementation, relations between a parliament and independent bodies, and the use of parliamentary powers.

Members of parliament and parliamentary staff from Bosnia and Herzegovina, Croatia, The Former Yugoslav Republic of Macedonia and Serbia, along with five members of the European Parliament, have been taking part in the meeting.

The event is a part of a series of EP-initiated seminars aimed at strengthening the capacity of parliaments in the enlargement countries of Western Balkans.

The participants announced a regional meeting on the role of national parliaments in negotiations for the EU accession, to be organized by the European Commission and the RCC Secretariat in Sarajevo on 17-18 March 2011, under the framework of the Multi-Beneficiary Instrument for Pre-accession Assistance (IPA) Working Group on Public Administration and Governance.