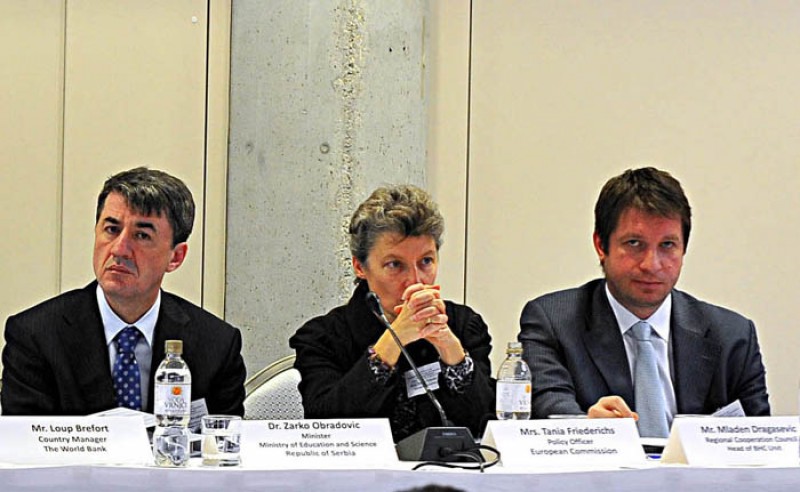 Žarko Obradović, Minister of Education and Science of Serbia (left), Mladen Dragašević, Head of RCC Building Human Capital and Parliamentary Cooperation Unit (right), and Tania Friederichs, of the EC’s Directorate General for Research and Innovation, at the conference launching Western Balkans’ research and development strategy, in Belgrade, Serbia, on 24 November 2011. (Photo: Courtesy of Serbian Ministry of Education and Science)

BELGRADE/SARAJEVO – A two-year project to develop a strategy for regional dimension of Research and Innovation cooperation in the Western Balkans has been launched today, in Belgrade, Serbia.

The event was organized by the World Bank, in cooperation with the European Commission and the Regional Cooperation Council (RCC) Secretariat. It was supported by the Ministry of Education and Science of the Republic of Serbia.

The aim of the project is to develop a strategy that will foster cooperation at regional level by interconnecting research institutes, pooling resources, training scientists and transferring knowledge across the region to increase its competitiveness. The RCC has facilitated and supported its development in close cooperation with national authorities from the Western Balkans and international partners.

Participants of a three-day workshop which launched the project discussed ways to implement it, learned about good practices and experiences from renown experts on research and innovation policies, received feedback from business leaders about challenges and opportunities in conducting related activities and outlined solutions to mainstreaming  competitiveness policies with increased research and innovation efforts at regional level.

Žarko Obradović, Minister of Education and Science of Serbia, emphasized the importance of cooperation among the Western Balkans countries in the areas of science and research.

“The Research and Development Strategy for Innovation in the Western Balkans is effective mechanism for active participation of the countries from the region in the European Research Area.”

Mladen Dragašević, Head of Building Human Capital and Parliamentary Cooperation Unit at RCC Secretariat, expressed great satisfaction with the start-up of the process of development of this important Strategy.

“Launching of this key strategic project of the Regional Cooperation Council in building human capital area is the result of preparatory work of the experts from the region, the European Commission, the RCC and the World Bank.”

“It’s time for research, development and innovation to contribute to economic development of the Western Balkans in more effective ways, and the launch of this Strategy is the right step in that direction” said Paulo Guilherme Correa, Lead Economist, European and Central Asia Region of the World Bank.

The European Commission, represented by the Directorate General for Enlargement, and Directorate General for Research and Innovation, welcomed this initiative which is fully in line with the Europe 2020 strategy that calls upon increased research and innovation efforts at all levels and by all stakeholders. Developing a strategy on regional cooperation will contribute to the European Research Area by avoiding fragmentation and creating a critical mass necessary for the EU’s Innovation Union. This project is also to be seen as a step forward in the region’s path towards the European Union.

The event gathered decision-makers from relevant ministries of science, technology, and education, representatives of public and private sector agencies dealing with R&D and innovation policy, as well as representatives of research and higher education institutes from the Western Balkans.