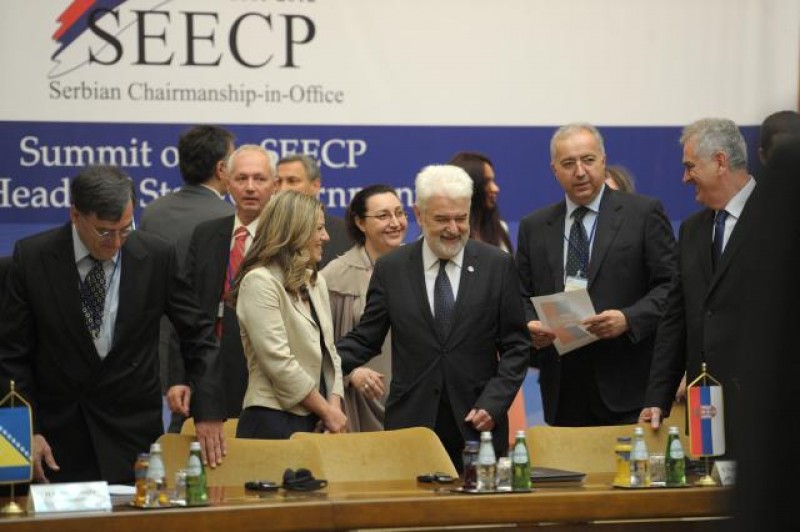 Heads of State and Government of the South-East European Cooperation Process met in Belgrade, Serbia, on 15 June 2012. (Photo: Tanjug)

BELGRADE/SARAJEVO, 15 June 2012 – The Heads of State and Government of the South-East European Cooperation Process (SEECP) praised in Belgrade today the achievements of the Regional Cooperation Council (RCC) and its Secretary General Hido Bisevic, approving at the same time of the election of his successor Goran Svilanovic.

They expressed gratitude for the valuable efforts of the first and outgoing RCC Secretary General Hido Biščević in organizing the new RCC structure, ensuring political and financial support in times of crisis and advocating for the region’s interest, thus making the RCC the effective operational arm of the SEECP.

The region’s leaders approved the Decision of the Ministers of Foreign Affairs of the SEECP of 14 June 2012 regarding the appointment of Goran Svilanović as the new Secretary General of the RCC. They wished him every success and extended assurances of firm support and encouragement in carrying out his demanding mission.

The Heads of State and Government stressed the need to use the institutional backbone provided by the RCC to transform political declarations and decisions into concrete projects and programmes to the benefit of the citizens in South East Europe (SEE).

They welcomed the results achieved by the RCC in the implementation of the Strategy and Work Programme 2011-2013 and the RCC Secretariat Self-assessment report on the implementation of the first year (2011) of the Work Programme. In particular, they noted the achievements in ensuring effectiveness of the Regional Strategic Document 2011-2013 and the Action Plan in the area of Justice and Home Affairs, in completing the transfer of the SEE Investment Committee from the OECD to the RCC, in completing the transfer of the ‘Ljubljana Process’ from the Council of Europe to the RCC through the establishment of its Task Force for Culture and Society, the development of regional cooperative mechanisms in the security area, the establishment and successful work of the European Association of Public Service Media in SEE and other successful results by the RCC as appraised also by the RCC Annual Meeting of 13 June 2012.

The leaders called upon the EU to continue firmly its enlargement policy provided that conditions are met and requirements are fulfilled on individual merit.

Addressing the event, RCC Secretary General Hido Biscevic thanked the Heads of State and Government for a continuous support to the RCC and stressed that the positive momentum in South East Europe must be preserved and further capitalized.

“A continuous development and advancement of our region has to be consistently pursued as we bear in mind the enormity of the consequences of a perpetuated instability. This must be seen as an impulse to a greater regional self-responsibility. No one has the luxury of time when stagnation, lethargy, prolonged strategic vacuums and other forms of regional anachronisms are still looming.”

“Regional cooperation with a targeted regional approach is and would certainly be one of the most effective platforms for economic growth and social development as well as for rekindling other under-developed sectors shared by the countries of South East Europe.”

Secretary General Biscevic invited the SEECP Participating States to make the best possible use of the RCC as a platform for pooling together regional large-scale projects that would bring new improvements in the region.

“Finally, I would like to express gratitude to our Serbian hosts for the fruitful cooperation achieved with the RCC and its Secretariat and wish the best of success to the incoming Former Yugoslav Republic of Macedonia Chairmanship-in-Office of the SEECP.”