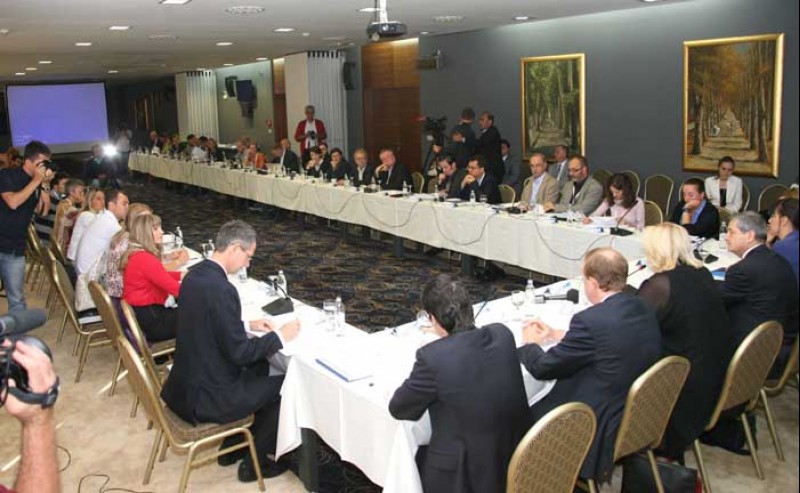 The 2nd Academy on Media Law in South East Europe was held under RCC auspices on 3-5 September in Sarajevo, Bosnia and Herzegovina. (Photo: RCC/Zoran Kanlic)

SARAJEVO – Participants of the second edition of the Academy on Media Law in South East Europe proposed ways to increase pluralism of content and views in the region and the independence and accountability of public service media, at a three-day event that closed in Sarajevo today.

The Academy participants emphasised that a high number of media outlets in the region does not equal plurality of views, content and sources. Although viewers can choose between plenty of channels, political and economic interests prevent pluralism of views. The participants agreed that there is a lack of qualitative data on media pluralism. Surveys are needed to evaluate both internal pluralism, with public service broadcasters to assess pluralism of content within public media, and external pluralism, to assess pluralism of views in a particular country.

The participants agreed that a crucial aspect that hinders media pluralism is the ownership structure of the media. While most countries have legislation in place that prevents cross-ownership, media monopolies and political figures owning media, this legislation is not always properly implemented. Media regulatory bodies and anti-trust agencies should work closer together and be better empowered to monitor ownership structures and impose, where necessary, sanctions.

Finally, the Academy participants concluded that clear legal provisions are needed to regulate state advertising. Public institutions, including ministries, should be required by law to make public and transparent all advertising expenditures in public and private media. There should be clear criteria for the selection of certain media for state advertising campaigns. These criteria should also take into consideration the audience share the selected media reach.

The closing remarks at the Academy were delivered by Goran Svilanovic, Secretary General of the Regional Cooperation Council; Ambassador Fletcher M. Burton, Head of the OSCE Mission to Bosnia and Herzegovina; Tanja Topic, Head of the Banja Luka Office of the Friedrich Ebert Foundation; Josip Popovac, Secretary General of the European Association of Public Service Media in South East Europe; and Andris Kesteris, Principal Adviser for Civil Society and Media at the Directorate General for Enlargement of the European Commission.

The three-day event was implemented under the auspices of the Regional Cooperation Council and in cooperation with the Friedrich Ebert Foundation, the OSCE Representative on Freedom of the Media, OSCE field operations in South East Europe[1], the European Broadcasting Union, the European Association of Public Service Media in South East Europe and ARTICLE 19: Global Campaign for Free Expression.

The Academy on Media Law seeks to enhance cooperation in the development and implementation of progressive media legislation in South East Europe in line with international and European media standards. It aims at safeguarding media freedoms and the right to freedom of expression by sharing and learning from the best legal frameworks and practices in the enforcement of media standards in the region.

The information on the Academy on Media Law in South East Europe is available at www.rcc.int. More detailed conclusions and report on the findings of the Academy will be posted at the website in the course of September.