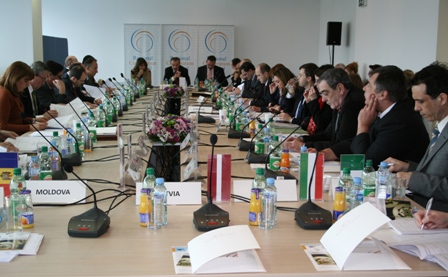 SARAJEVO – The 29 members of the Regional Cooperation Council (RCC) Board gathered today in Sarajevo to discuss cooperation with 18 regional taskforces and initiatives active in South East Europe (SEE) and to review RCC activities since December 2008.

The RCC Board exchanged views with representatives of the regional taskforces and initiatives which are operating under RCC auspices or have regulated appropriate relationship and coordination of activities through specific arrangements with the RCC Secretariat. The aim is to facilitate, streamline and coordinate the work of the taskforces and initiatives, and provide them with assistance in gaining access to regional and international political, technical and financial support required to fulfil their objectives.

At the same time, the RCC Secretary General, Hido Biscevic, presented the Board members with his first quarterly report in 2009. The report focuses on activities in the RCC Secretariat’s priority areas of economic and social development, energy and infrastructure, justice and home affairs, security cooperation, building human capital, and parliamentary cooperation; as well as on political relations with RCC members; process of networking among the RCC SEE members, European Commission and international financial institutions; the outreach campaign in RCC members from SEE; and enhanced dialogue with the European institutions, and other regional organizations and initiatives.

In the coming period, the RCC Secretariat will work to contribute to economic and social progress in SEE, support the region's European and Euro-Atlantic aspirations, and create a climate and environment conducive to dialogue and cooperation. It will aim to finalize preparations for the establishment of the South East Europe Regional Fire-Fighting Centre and the Southeastern-Central Europe Catastrophe Risk Insurance Facility.

The regular quarterly report covers the period between 6 December 2008 and 28 February 2009. It is available HERE.

The RCC Board provides the organization with operational guidance and supervision. It consists of those RCC members contributing to the budget of the RCC Secretariat as well as the European Union, represented by the Troika, consisting of the EU Presidency, the European Commission and the EU Council Secretariat.