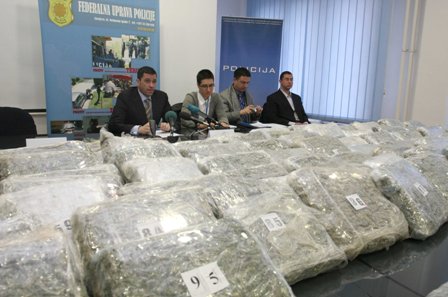 RCC and UNODC signed a Memorandum of Understanding to step-up the cooperation for security and justice in South East Europe, in Vienna on 21 May 2009. ( Photo RCC/Samir Pinjagic)

VIENNA – Cooperation between the United Nations Office on Drugs and Crime (UNODC) and the Regional Cooperation Council (RCC) was enhanced today with the signing of a Memorandum of Understanding to build security and the rule of law in South East Europe. A joint priority will be to address the challenges posed by illicit drugs and organized crime in the region.

The Memorandum of Understanding will form the basis for technical assistance to strengthen national administrative and institutional capacities, develop legislation and policies, and implement United Nations and European Union standards and principles.  The sharing of knowledge and best practices will also be facilitated.

The aim is to strengthen national criminal justice systems and the protection of human rights, while promoting the independence and integrity of institutions by tackling corruption. Efforts will be made to address money laundering and the financing of terrorism as well as asset recovery. Support will be given to the prevention and treatment of drug-related problems, including the spread of HIV/AIDS.

“With this Memorandum of Understanding both organizations can hope to contribute to strengthening the democratic process, rule of law and human security in South East Europe”, said Hido Biščević, Secretary General of the RCC.

Launched in February 2008, the RCC is the successor to the Stability Pact for South Eastern Europe. Joint activities will be conducted in the countries covered by the Memorandum of Understanding, such as regional and national projects; training; assessment and research; and awareness campaigns.

A UNODC report released in May 2008 entitled Crime and Its Impact on the Balkans concluded that that South East Europe has become a low-crime region after the conflict and violence of the 1990s. Nevertheless, the region remains vulnerable due to enduring links between business, politics and organized crime.